Today, I wake up (in the afternoon, admittedly) to see this: 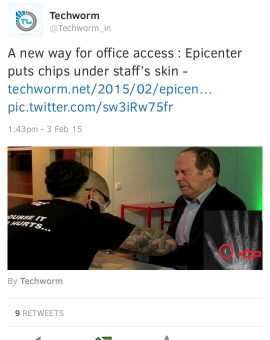 Did I break something when I put up a post with “666” in its title?  ’Cause this is the kind of thing that’s been prophesied.

(And notice the “OF COURSE IT FUCKING HURTS” T-shirt?  It’s is if the whole thing is being rubbed in too.  And the place is called Epicenter, for crying out loud.)

Now, this implanting isn’t mandatory (yet), but the alarm bells are certainly ringing with me.  I knew the technology was already here, as a means of digital barcoding (in clothing), and similar uses of chips for pets, to locate them if lost or stolen.  But this is homo sapiens we’re talking about.

Now before I have an aneurysm, let’s enjoy a little history brief…

In 2004, the FDA had approved VeriChip’s implantable RFID chips for use in humans.  (Source: Ars Technica.)

In the category of unbelievably bad ideas that we all knew were making their way toward reality whether we like it or not comes the news the FDA has just approved VeriChip’s implantable RFID chips for use in humans. These are the same chips that we’re currently using to identify our pets. VeriChip is touting the chips’ medical applications, as a way of potentially saving lives by storing medical data.

In 2012, eight people payed $30 each to have an RFID chip (EM4012) implanted into their respective right hands.

At this years Toorcamp, a meetup for Hackers, there was an “implantation station” where, for $30, attendees could get RFID chips implanted into their hands.

I missed the ball.  The story mentioned first here, first appeared late January, by the BBC and CNET.  Hannes Sjoblad, who organized the process of being ‘chipped’ at Epicenter spoke to the BBC.  He said:

“We want to be able to understand this technology before big corporates and big governments come to us and say everyone should get chipped—the tax authority chip, the Google or Facebook chip.”

It may sound absurd, but never say never.  There are countless people, namely bureaucrats, that want control over people.  The majority of those out to control you may be lazy in many respects, but they don’t care.  (The cause of wanting to control over others is giving up on one’s own ability to take care of a problem.)

There are so many things going on that I’m extremely hesitant to discuss because, well, it would all make me sound like a nutjob, despite how much of the factual information I’ve been hearing for years has been proven true and worse.

Would you go the serious length of having a chip implanted in you just to access doors or copiers, or find your keys?  It’s beyond invasion of privacy and RF radiation exposure.  It’s stupid.  It’s unethical.  It’s more of a curse than a convenience.  And it’s alarming.

Please spread the word on this. …And hopefully I won’t die of mysterious causes. 😉  Okay, so maybe I shouldn’t wink at that…