Cuban thinks the plan to regulate the internet as a public utility will “will fuck everything up.”  He said this at the Code/Media conference last Wednesday, in California, according to re/code.  “Net neutrality is just a demonization of big companies.”  (Source: The Daily Caller.)

How about monopolization?  The big companies win in these kinds of “fights.”  Have you ever heard of a demonized big corporation really losing?  Especially with lobbies in Congress?

In 2010, the courts struck down an earlier move by the FCC, saying the government-appointed entity didn’t have the authority to regulate the internet.  Just let that little expression sit for a minute:  regulate  the  internet.  There have been fights in other countries in regards to matters like these, and they’ve been for free speech against more government intrusion.

Sure there’s abuse (and it would be good to have some actual data on that, when it comes to cable companies, than throw red-meat fear at the public), but how does more abuse help?  This ruling attempts to fix something that isn’t broken.  It attempts to make the government look friendly.  And guess where the cost goes?  To the consumer.

And then one of those buzzwords that über-capitalists use came up: open.  It gets creepier and creepier every time.  To “fix a problem” with that so-called “open” nature, where transparency is lost.

It’s times like these where polling data shows that people want change but not the kind of change proposed when it’s explained to them.

The idea that the internet will die because some speeds are crappier is, to me, a load of crap.  We survived dial-up, end of story.  There is, however, reason to consider internet a utility, like telephone service, since many services now DEPEND on internet access, and the dependencies are expected to grow.  But net neutrality goes further than that.

The field of competition changes with every new regulatory law, and of course not always for the better.  They almost always help the BIG corporations, and harm the small ones, your local services, especially those that don’t receive taxpayer money or manage with subsidies (and it’s a real headache just how complicated the tax system is that subsidies are needed because of deliberately high tax rates).

It’s also telling when the big corporations want this, as some do.

Now…if I were to step into my pile of politics…I would say this is akin to insurance companies getting demonized alongside perks as a result of the Affordable Care Act.  Notice your health insurance bills going up?  Watch your ISP bill go up.  The IRS might as well play a part in all this, gaining your personal info, ’cause…why not?  It does with the ACA; the IRS is supposed to have access to your medical info.

And of course, today, pseudo-socialists claim the people will have more ownership, more control…as if state and people ever mean the same thing.

Sigh… Maybe I’m wrong.  Maybe the FCC, known for increasingly tougher broadcast licensing, First Amendment-violating fining for indecency, growing its fines to a quarter of a million dollars for something as insignificant as the word ‘fuck’ broadcasted once over the air, won’t make free speech more difficult.

Maybe the greedy Democrats and greedy Republicans will listen to the constituents who’ve done their research and not the constituents in their pockets.  Maybe when hell freezes over.  Then again, hell is probably actually a frozen wasteland, given Maine.  (And Canada.) 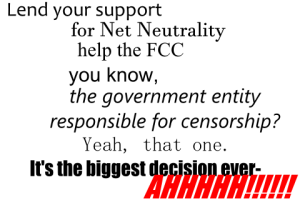 Editor’s note: I don’t do politics often.  But when I do, I drink Dos Equis.

(It’s painful.  This is all painful for me.)