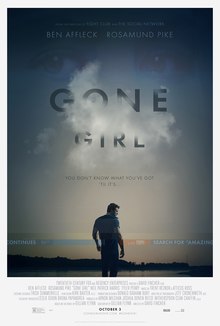 Some movies are just damn creepy.  Yet this one was actually pretty mild in my view, relatively speaking.  (It’s a soft-to-moderate ‘R’.)  Flynn’s screen adaptation is very close to the original novel, so you can read my review on that for the synopsis.

The movie starts off much the same as the novel.  It cuts to the chase, and intercuts between the main-character points of view, all the way to the big twist.

Having read the book, I can say that most of the novel is intact here.  This is one of those rare cases that the script matches so closely the intent of the original, that it should go on record how great a writer Gillian Flynn is, as well as David Fincher, in bringing it to life, the way he did.  In an interview with The Kansas City Star, the Kansas-reared Flynn was on the record, stating, he “really liked the book, and didn’t want to turn it into something other than what it already was. … He wanted a faithful screen adaptation, not a whole new thing.”

The acting, I found was grade-A, for the most part.  I wasn’t too enthused with Ben Afleck’s performances, but it was still one his best to date.  Overall, the film elevated its players, especially Rosamund Pike, who plays “Amy Dunne.”  Those that haven’t seen Pike act on screen can see what she’s capable of, and those that have seen her may see a different side of her altogether.  The first shot of her in the movie, as she turns her head, kind of defines the meaning of ‘creepy.’

Unfortunately, like most screen adaptations, a visible amount of the novel’s depth was lost in scriptwriting process.  Whole scenes and characters were cut for time.  Worse, the execution “dialed back” on potential strengths.  Some of the music was redundant of Reznor/Ross.  And some of the editing, with quick fades, made the movie look like a two-hour trailer.  But even then, you could call it a superb two-hour trailer, that the film in whole still manages to stand out so well.

Though the film adaptation is not perfect and can’t really replace the novel, I found myself able to watch it more than once without getting tired.  Who can say that of most films?  Grade: A-.