Well.  I’ve been gone long enough that you may be wondering what happened to me.  What can I say?  I’ve been busy and distracted.  I’ve settled in the group home, and for months it’s been one change after the next, in staff, and loud laughter, and spontaneous clapping by a roommate who revolves around the living room TV, most often channel surfing music videos.  (It didn’t take long for him to wear out the batteries in the Roku remote.)

And then you count the chores we’re all used to—e.g., doing dishes… but then cleaning up others’ messes, which is not something I signed up for.  And that includes staff leaving plates and utensils in the sink.  Sometimes people don’t learn to not put utensils in the garbage disposal sink; they fall in.  To top it off, some areas are never cleaned despite the obvious warning of mold and ants come summer unless I bother.  Can you sense my frustration?

Oh, and now the staff knock on my bedroom door to “check up on me” at times, even if it means waking me.  And on program days, I’m awake anyway for the unpredictable Logisticare service that’s so awful one of its drivers, who was already late, pushed his hybrid car so hard it broke down on the highway, Friday, with fumes entering the car.  Other out-of-the-ordinary things have been happening in the last few days; I lost a receipt as if it disappeared out of thin air.

So I’ve been pushed and pulled around in many little different ways that add up, and it becomes not only frustrating but time-consuming on top of that day program I’ve been too timid to end.  (Still, what do I do if I end it?  Always out of the loop, I don’t have ideas.)

One plus: I’ve learned to cook pasta pretty well.

Nevertheless, peace and quiet is harder to find.  And without good ideas and new ideas, or fulfilling relationships, I’m not satisfied enough to rest.  So after a share of social media and informative videos, I don’t get enough sleep and can’t find my voice or be bothered to write a string of words longer than a tweet or two.  But surely I could have posted here, right?

It’s addictive or seemingly welcoming but to the point of being oversaturated, and in a way apathetic towards thoughtful blogging, even though the platform was intended for micro-blogging.  Today, you can find endless retweeting of one-offs that serve the warning that quality is not appreciated nearly as much as retweeting among tribes.  Like any social media, the more you stand out in the “wrong” way, the less you will be heard.  And it all happens in real-time, further manipulated by Twitter’s popularity algorithm.

The rush of the holiday seasons was rather pronounced at the Goodwill in Biddeford.  Christmas trees and decorations were on sale over a week before Thanksgiving.

I would imagine some other stores were selling Christmas items at the time.  But I don’t know as I’m not hooked on consumerism, and haven’t had much reason to venture out apart from groceries, walking, and seeing movies with my mother.

The Downeaster Amtrak station has its own adorned tree.

And earlier than that day, the Maine Mall had its own…

…half-tree.  Split for a seat, and seated for Santa to situate himself where the lord split ya— er, sit.  And the silvery ornaments on the “half-tree” have LEDs that light and fade sequentially. 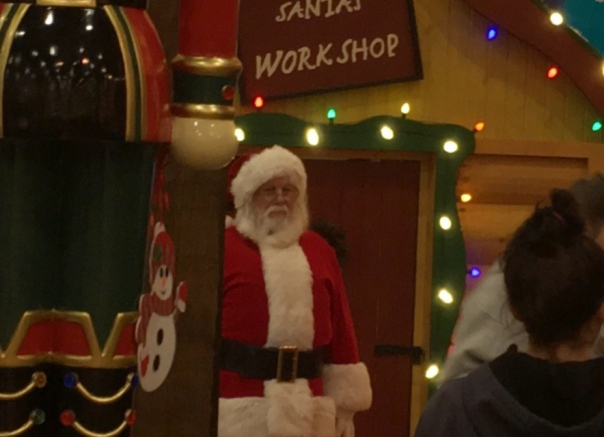 He knows what you did.

Lights are up  just about everywhere, strung up on properties public and private, even on old outdoor trees.

Even at the movie theater.

And so many lights at the Saco Museum.

So, so many lights.

And too much to fit in one post, so I will pause here.  I’ll be back with more.  Until next time, have a good Winter solstice day. 🙂 And if you’re wondering where the trains are, here are some teasers for what’s to come: